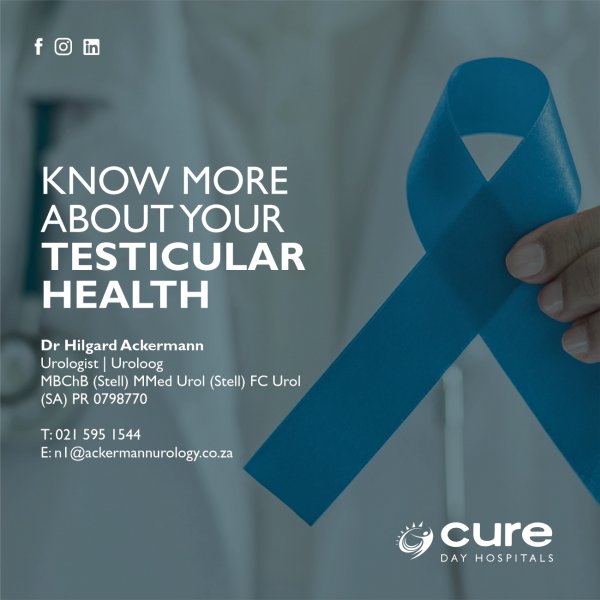 Know more about your testicular health

Testicular self-examination is pivotal to screen for urological problems in men.

Three distinct areas are identified on examination.  Firstly, the oval-shaped soft testes, of which the left testes lie lower (“Linker sinker”).  Secondly, the spermatic cord, to which it is attached.  Lastly, the most common site of concern, the epididymis, which lies attached to the side of the testes.  They collectively lie in the scrotum.

Two testes should be always present in the scrotum after birth.  If only one or none are present, it is termed undescended testis or cryptorchidism.  One testis often retracts upwards, but when relaxed or in a hot bath, are present.  This should never persist in older boys, as retractile testes can later remain ascended.  Undescended testes require surgical investigations to locate the missing testis and if located and found viable, restore normal anatomy.   The surgery is performed as a day surgical case.

Scrotal problems are often separated by those causing pain, and those without pain. In practice, it is not always the case.

In babies, swelling of the scrotum can occur at birth and early infancy.  It gradually decreases with age and often fluctuates when the baby cries or when raised in the upright position.  A fluid hernia should be ruled out by a urologist, whereby a communication exist between the abdomen and the scrotum. We close the are of communication, with a day surgical procedure.

As boys grow older, the testes can suffer acute pain due to a direct blow to the testes.  It can cause a week of inflammation, or even fracture the testes, leading to testicular loss of function if not recognized early.  For a tender testis after injury, a scrotal ultrasound is mandatory.

Often the history is doubtful and could mask acute testicular torsion. It often wakes up a young pubertal boy in the middle of the night with sudden onset of severe pain.  The spermatic cord twists and cuts off the blood supply the testes.  It can occur up to the age of 40!  After six hours, testicular function is compromised, hence the absolute urgency. Clinical examination by an emergency doctor is mandatory.  Surgery to untwist the testis and surgical fixation to the scrotal wall is performed.

Often with acute pain, epididymitis is the other main cause.   It is more common in older boys and men and is caused by a urinary infection.  Clinical history will reveal whether a sexually transmitted infection is the culprit, and often in older men, Escherichia Coli.  When worsening obstructive urinary symptoms precedes this infection, a urologist opinion is mandatory, to rule out a urethral blockage, or an obstructive or cancerous prostate.  Antibiotics are given as a prolonged course, and often discomfort only settles after six weeks.

A thickened spermatic cord situated on the left is often due to a varicocele, or varicosities (“spatare”) of the cord.  Due to a lack of valves in the vein, often in tall men, blood pools in the veins draining the scrotum.   We intervene when it causes men to struggle to conceive, when it causes the testes to shrink, or when it causes pain.  Fifty percent of men who has only pain, suffers the persistence of pain after the surgical procedure for this condition.  A microsurgical varicocelectomy is performed as a day procedure, the current preferred procedure.

Gradual painless enlargement due fluid collection of the scrotum is termed a hydrocoele. The fluid surrounding the testes, vital to ensure normal mobility in the sac, increases in this condition and fails to be absorbed.  It often causes minimal discomfort and can be observed for years.  Once it becomes a visible bulge, or cause mild discomfort due to size, we intervene with a day surgical procedure to remove the fluid.

When the gradual enlargement is worsened by coughing, or straining, an inguinal hernia should be ruled out by the urologist or general surgeon. A defect occurs in either the opening of the canal leading to the scrotum, or the floor of the canal, due to laxity of the tissue.  We can use reinforced artificial mesh (a thin webbed sheet) to address the defect.  The procedure can be performed with key-hole surgery, termed laparoscopy.  The procedure has a recovery time of up to two weeks.

A lump in the scrotum often causes the most distress, but importantly, a delay in seeking medical attention.  The fear of underlying cancer incapacitates a man.

Testicular cancer should never be missed.  It is the cancer in men that responds the best to the currently available means of treatment. It is most often seen in men between the ages of 20 and 45.

Having previous undescended testes, an abnormally small testes or a sibling with testes cancer can predispose you to develop testicular cancer.

A painless hard swelling is found on examination.   Warning signs are when weight loss, or a palpable abdominal mass is seen in conjunction with the hard testis.  Blood tests could confirm the suspicion of cancer.

Diagnosis is made by surgically removing the testes, confirming the type of cancer.  After a series of contrasted tomography (CT) scans, treatment and follow-up is performed by an oncologist.

A short course of chemotherapy can cure up to 99% of men with early-detected, term localized cancer.  Most of the testicular cancer, even if it showed signs of early spread, can be cured.

We will not sell, share, or rent your Personal Information to any third party or use your email address for unsolicited mail. Any emails sent by us will only be in connection with the provision of our services and/or the marketing thereof. We use cookies on our website to give you the most relevant experience by remembering your preferences and repeat visits. By continuing in the website you accept the use of cookies.

FOR INFORMATION ABOUT COVID-19 VISIT: